Housing and the lack of it is a huge problem in Irish society at the moment; after reading yet another horror story of people being forced to pay very high prices for average, and below average, homes I wondered what it was like for our ancestors and who was their landlord.

So I looked specifically at the District Electoral Division of Blarney in 1911 and it makes for interesting reading. I picked out the top five landlords, based on the number of houses, where according to the census returns, the landlord was recorded, some places on the census returns were left blank and we have to allow for some margin of error as all of these forms were filled in by hand.

But the Top Five landlords, in the Blarney area in 1911, by the number of houses, is as follows:

And when we look at the information by the number of people living in these houses in this year the order changes ever so slightly.

C.R.D.C, and other Rural District Councils, were established by the Local Government (Ireland) Act 1898. They were to be responsible for housing, rural sanitation, and roads and public works. The provision of labourers’ dwellings was one of their main functions. They were abolished under the Local Government Act 1925 and functions were transferred to the County Councils and to the Boards of Public Health. In 1911 the C.R.D.C. had rented out forty-seven houses in the Blarney district, forty six of these were what were classed as second class houses and then one single third class house.

I found this interesting design for a similar cottage; this was for Cashel Rural District in the early 1920’s.

The drawing itself is almost like a piece of art, very beautiful. 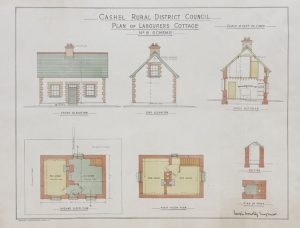 In 1911 the Mahony brothers company had one hundred and forty three houses rented, mostly to staff in the Woollen Mills in the immediate Blarney area.

The houses were located in Knocknasuff, Mangerton Terrace, Millstream Row, Muskerry Terrace, Shamrock Terrace, St Patrick’s Terrace, Telephone Terrace and Waterloo Road. In total, these houses rented out by Martin Mahony Bros. houses six-hundred and twenty one people; that averaged out at 4.3 people per building.

There were fifty-eight houses in the Blarney area which were rented out by Sir George Colthurst, or more accurately, the Blarney Castle estate.

There was one hundred and seventy four people living in the fifty-eight houses, giving an average of 2.5 people per house.

There was a farm/estate in Clogheenmilicon that was also a first class house with Sir George as the landlord, David Ross, a magistrate and farmer, lived there with his family.

There was a second farm rented to a Samuel Ellis in Clogheenmilicon; Robert Wyndham Hunt, a retired military officer rented the last first class house in Curraghnalaght.

As an aside, Robert lived here with his wife Aileen and their children, there is a very interesting discussion here about why Robert and Amelia fostered their six children a few years after this census.

The exotically named Devaynes Smyth was a Magistrate and Deputy Lieutenant of Ireland who lived in Bray Head House, previously known as Sans Souci, in  Co Wicklow.

He had married into the Putland family, the youngest daughter of Charles Putland, Georgina Doretha.

The Putland family had vast tracts of land across Ireland which included land at Garrycloyne and the surrounding areas. 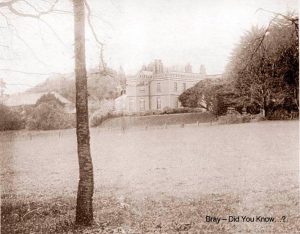 One of the houses which the Putland estate owned was Dawstown House which was later acquired by John Turpin; I briefly wrote about Dawstown house in this article about #Vótail100.

In the 1911 census Devaynes was landlord to five second class houses in the Blarney area, specifically Ballymaraha.

There were sixty-six people living in these houses, most were listed as being farmers or farm labourers.

Dr. Richard Barter, founder of the first European Turkish baths in St Ann’s Hill Hydro Hotel just outside Blarney, was registered as being the landowner of twenty houses in the Blarney area in 1911, six first class houses in Killowen, twelve second class houses in Kilnamucky (houses for staff in the St Ann’s Hydro hotel) and two fourth class houses.

One of the second class houses in Killowen was occupied by my great-grandfather, Harry Wallace and his wife Hannah and their new baby girl, Mary Wallace who is my lovely grand-mother!

They lived in this house with Harry’s parents, Thomas and Mary Wallace along with Harry’s brother Daniel. All men worked in the woollen mills in Blarney.

I am deliberately not going into much details about the other first class houses that Dr Barter had leased out as I intend on doing some more investigation to do it justice.

I hope you enjoyed it, if you have any comments or updates on anything that i have got wrong please let me know!