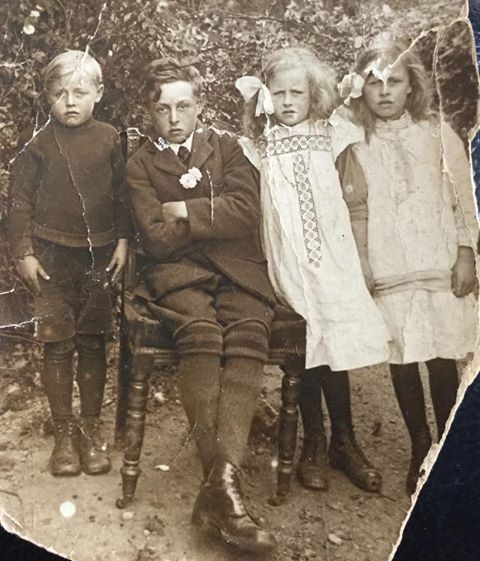 We have very few photos of my grandfather as a child, I suspect like most families photos from the early 20th century are not plentiful. We do have this one, and  it is the only one we have, which by a process of elimination I think was taken about 1918/1919. From left-to-right: Edward (my grandfather), his brother Timothy, and his sisters Mary and Maggie, there is one sister Bridget is missing. I have always loved this photograph for a number of reasons and have no idea what the occasion was; I love the style of the girls dresses and the way they are looking warily at the camera. I love my grandfathers’ blonde locks and his chubby face. I love the knee high socks that the boys wear But what has fascinated me most of all is Timothy and that “puss” on his face! He really doesn’t want to be there and has an awful lot of attitude!

All I know of Timothy McSweeney is his date of birth in July 1909 and the date of his death September 1924. It is sad to think that this boy, who only lived for fifteen years, left no mark on the world once he and his family died.

Timothy was my grandfather’s older brother, a native of Tower village. He only has a birth cert, death cert and a return in the census of 1911 to show he ever existed in officialdom. Unlike the previous name that caught my attention, Ethel Susan Lucena, Timothy led a relatively uneventful life with no mention in any newspapers of the time. But, with a little imagination and the power of Google, I can fill in some of the details that make up the life of Timothy between these two dates.

Timothy McSweeney was born in July 1909 in the Lying In Hospital (otherwise known as the Erinville) on College Road in Cork city. His parents Bridget (nee O’Mahony) and Benjamin McSweeney were living in Sheare’s Street at this time; both were from Tower and like generations that came after them moved to the “Big Smoke” for work. Benjamin was working as a labourer and Bridget was working as a maid in a house in the city.

Two years later when the census was recorded in April 1911 Timothy was staying with his maternal grandparents in Tower. It is difficult to know if he was simply visiting his grandparents for the night or if he was in fact fostered. His parents had by then moved into lodgings on Griffin’s Lane, one of the many laneways which snaked off Barrack’s Street in the city. And by the time of the census Timothy had a baby sister, Mary-Jane who was just three months old. The family would eventually grow so that there was Timothy, Mary-Jane, Edward, Bridget and Maggie.

Timothy’s mother Bridget came from a farming family in Tower, they had some land which is now where Muskerry Heights is situated but also Bridget’s parents, Timothy’s grandparents, both worked in the St Ann’s Hydro Hotel as well , her mother as a Bath Attendant & her father as a Hall Porter.

Timothy more than likely went to primary school in Blarney; his younger brother Edward would recollect that he and his sisters used to walk from Tower to Blarney to attend the school. Not too many nine or ten year olds would be left walk that same route today!

Timothy’s uncles on both his mother & father’s side played hurling with the famous Shournagh Valley team so it is quite likely that he too played. One of his uncles on his father’s side played with the Tower Brass Band so it is possible that Timothy also played an instrument. I like to think that Timothy spent his days roaming for miles on his bike or on foot, fishing in the Shournagh river, playing hurling with his friends, showing off in front of girls, travelling on the Muskerry Tram up to Donoughmore or into the city centre and maybe even climbing to the top of Blarney Castle to give the famous stone a smooch.

During Timothy’s brief life many important historical events occurred; the sinking of the Titanic in 1912, which he would have been blissfully unaware of as he would have been just four. He lived through World War One which would have made much more of an impact on Timothy and his family as his father joined up and fought in Gallipoli.

Timothy would have been seven when the Easter Rising happened; the following years of the War of Independence and the Civil War would have had a huge impact on Timothy. Cork was especially affected by death and brutality during the years between 1916 and 1922 with over 700 people killed. (Keane, 2017).  It seemed that nearly every day there was an incident being reported in the newspapers of murder and attempted murder. Reading the details today I wonder how difficult life really was for our ancestors; how difficult and distressing it must have been for Timothy’s mother, worrying about her young family, especially her eldest son who was a teenager by this time.

I went to see U2 play in Croke Park in July 2017 and marvelled at the adoration Bono invokes in some people. I like to think that Michael Collins was treated in the same way, like a rock-star with screaming fans feting his every move. I would also like to think that Timothy went to see Michael Collins speak at one of the many rallies which he held in Cork city. In March 1922 one such monster rally on Grand Parade ended with anti-treaty protesters firing their guns into the air in an attempt to intimidate the crowds. It is hard to imagine any of today’s politician’s causing such passion and enthusiasm in their supporters!

Blarney and Tower were relatively unscathed by the killings during these four years of war but in 1920 the Cork Number 1 Brigade of the IRA carried out an attack on the RIC barracks in Blarney. (Hart, P. 2009)

The RIC barracks in Blarney was disrupting communications between the various Volunteer brigades stationed in Donoughmore and Macroom and Kilanamatra and the city centre.

There was one sergeant and eight officers on duty the night of June the 20th 1920, the barracks itself was not in an isolated position as it was, and still is, situated right in the middle of the village, positioned between the courthouse (now the library) and what was then Smith’s Hotel (now known as the Castle Hotel). The building was substantial with loop-hole walls and shutter and sandbag defences. There was no possibility of attacking the barracks from the rear and it was considered a waste of ammunition to attack from the front. So the decision was made by the brigade to blow a hole between the adjoining wall of the hotel and the barracks and then to storm the barracks through this hole. (On a separate note the members of the Blarney Men’s Shed re-enacted the attack for the launch of the Blarney Heritage May in June 2017; it was a great success!)

There was a comprehensive plan in place by the 1st brigade to facilitate the attack. All roads leading into the village, bar the Waterloo road which was designated the escape route for the attacking party, was blockaded by Volunteers with fallen trees and broken motor cars and carts with axels needing repairs.

Closing time in 1920 was 10pm and once the hotel patrons and guests were escorted out of the hotel to safety the charge was lit and an extremely loud explosion, which was heard as far as Cork city, rocked the hotel and the barracks. Bricks, mortar, plaster and broken glass accompanied a thick cloud of dust after the explosion. But amazingly when the Volunteers checked the wall where they planted the explosion they discovered that while the hotel side of the wall had been blown through there was still a wall on the barracks side. It turns out that the Volunteers had chosen the thickest part of the wall, which was actually the most solid part of the masonry where two fireplaces had been built back to back!

The decision was made that to continue the attack was futile and so the orders to evacuate were given and the Volunteers began to leave the village, mostly via the Waterloo road. While they did not capture any of the arms or ammunition that they wanted they did manage to disrupt the barracks and didn’t lose any Volunteers so it was considered a success. Elsewhere there was sustained fighting at Healy’s Bridge between the Donoughmore and Grenagh volunteers and the military that were advancing from the Leemount area after leaving the Army barracks at Ballincollig.

I wonder what it must have been like for people living nearby in Tower and in the village itself that night, hearing that huge explosion and wondering what was going on. No Facebook or Twitter to keep people updated on what was happening and while news no doubt spread like wildfire it would still have taken an hour or two for word of what was going on to reach Bridget and her family.

What must it have like for a mother with four small children under ten, hearing an explosion and gunfire and trying to decide what to do. Timothy would have been about eleven when this happened and I wonder how he reacted to this attack. Would he have been terrified by the explosion, the plume of smoke was said to be visible in the city so there is no doubt it was also visible in Tower? Would he and his younger siblings have heard the gunfire at Healy’s Bridge? At the time the family were living in one of the cottages situated behind Aunties pub; back then it was called the Sportsman’s Rest. Were people gathered outside the pub trying to understand what was going on? Was there much traffic, motor, bike or foot, whizzing through Tower heading to and from Blarney? Or was everyone inside their house with doors and windows firmly closed? I wonder what rumours were racing like wildfire between Healy’s Bridge and Blarney?

One of the outcomes of the War of Independence is that the Irish Free State was declared in 1922.  So Timothy had been born in the British Empire and died in the Irish Free State. He died, aged just 15, on the 20th of September 1924. His death certificate stated the cause of death was “Acute Pulmonary Phthisis”; Phthisis is the Greek word for tuberculosis. According to the death cert he had suffered from this condition for 6 months. Tuberculosis is characterised by coughing, both phlegm and blood, chest pains, fever and night sweats.  And in 1924 there was very little treatment available.

In 1922, the year that the Irish State was formed, there were 4,614 recorded deaths from tuberculosis, 611 of them under the age of fifteen. It is widely agreed that this is an under-recorded figure and in fact should be much higher. For every death, it is estimated that there were five to seven people ill with tuberculosis. The Irish epidemic began to decline gradually from its peak in 1904 (quite late by European standards) but for the first half of the twentieth century tuberculosis was the third leading cause of death among Irish children.

Timothy’s death cert states that he died at home and his death was registered by his maternal uncle, Timothy O’Mahony. He was buried a few days later in the graveyard beside Matehy church. It must have been extremely distressing for his mother to bury her eldest son at only 15 years. It must have just as upsetting for his younger siblings to suddenly lose their older brother. I don’t think that it really matters what century people lived and died in they were all loved and mourned the same way that we love and mourn today.