My grandmother Kit Cogan was born Kathleen Ambrose on 30th May 1936 in Killeen, Vicarstown, the youngest child of Michael Ambrose, from Gurth, and Nora (née Kelleher), from Knocknagoun, Rylane. I live on her father’s farm in Killeen and subsequently I have always felt more of an Ambrose than anything else. Thus, my interest in this side of my family is deep.

The vast movement of people that followed the Norman Conquest of England in 1066 brought the Ambrose family name to Ireland. The name Ambrose is derived from the Latin Ambrosius, which means immortal. The use of Ambrose as a Christian name was extremely popular and spread rapidly because of devotion to Saint Ambrose, who lived during the 4th century and was one of the four Father of the Western Christian church.

It is not certain when exactly the Ambrose name was first introduced to Ireland, however it is certain that there were Ambroses living in the Parish of Inniscarra in 1779. At Matehy Cemetery, in the right corner of the southern end, a headstone is erected to a John Ambrose of Gurth-a-Donoughmore (now Gurth) who died May 1779, aged 96 years. Also listed is his wife Mary (née Sweeney), who died July 1790.

The first recorded Ambrose to live in Gurth was Michael Ambrose who was listed as farming 59 acres with his brother William Ambrose in the Tithe applotment for the Parish of Matehy in 1830. That same year, their brother Morgan Ambrose was recorded as faming 41 acres in Killeen. The Tithe was a tax on arable land paid to support the Protestant clergy and it was bitterly resented by the people.

The above mentioned Michael Ambrose was my great-great-great grandfather and he married Kathleen Murphy of Mylane, Ovens in 1835. They farmed in Gurth with his brother, and together the couple had 11 children, 7 of whom lived to adulthood; Michael (see below), Joseph (my great-great-grandfather), Catherine, Mary, Margaret, William and Patrick.

In this article, I will focus on the two eldest of the family – Michael and Joseph.

Michael Ambrose was born on the 12th of June 1836. He was baptised the following day at the Roman Catholic Church in Cloghroe with his sponsors being a Mr. Patt Ambrose and a Mrs. Kate Connolly. He spent his childhood at Gurth with his parents and siblings. In 1860 Michael married Kate Donovan, and together they had 8 children; Catherine, Michael Jr, David, Mary (Molly), Joseph and William.

Michael and Kate lived in Coolflugh, in the house at Tower Cross adjacent to the current Aunties Pub.  Michael also inherited the Killeen farm from his uncle Morgan Ambrose. Michael later built a shoe-making factory in 1872 which his family moved into. He worked as the master shoemaker, assisted by his sons David and William, a manager John Cowhig and two shoemakers Michael O’Reardon and Cornelius Forde.

Michael emigrated to America in 1883 to become a member of the Jersey City Legislative Assembly where worked as part of the Economic Development Committee until he returned to Tower in 1892. The family bought the Public House at Tower Cross that same year (it was built in 1876), where his daughter Molly and son Michael were publicans. In addition, by 1911, the Ambrose Family owned 3 other private dwellings in Tower which were all leased to tenant families.

Catherine was the only of his children to get married. She married Daniel Rohan in 1887. They lived at 1 Peter Street, Cork. They had one son, James Rohan, born 1893. Daniel died 10th May 1895 so Catherine and James back moved to her family in Tower. James later married Katie Riordan in 1916. They had son daughter Catherine (later Mrs. George Kavanagh, Wilton). James enlisted in the British Army in 1916, the Royal Munster Fusiliers and subsequently died in St. Patrick’s Hospital, Cork from Tuberculosis on 23rd July 1918. Daniel, Catherine and James are all buried at St. Joseph’s Cemetery, Ballyphehane. James’ wife Katie then re-married to William O’Sullivan, amongst their children are Mrs.  Mitchell of Loughane and Bridget O’Sullivan who still lives in the former Ambrose-property at Tower Cross.

Michael Jr continued to run the businesses in Tower with Molly, David and William. With William’s death in 1914, and their only descendant James Rohan’s death in 1918, life was quite difficult for the remaining Ambroses of Tower. Money was plentiful but with little to spend it on, they spent a lot of it in their own Public House. Michael died in 1918 leaving the dwelling houses to his sister, the widowed Catherine Rohan, and the business premises to Molly. The farm in Killeen that he owned was sold to his uncle Joseph’s wife Lizzie in Gurth. Lizzie later gave the farm to her son, my great-grandfather, and this is where I now live.

Many Tower people are aware of the shooting of John Cowhig in the Ambroses shoe-making premises in 1920. This coupled with excessive spending and bad business decisions led to the Public House and Shoe-making Factory being sold in 1921. David later resided at the Cork District Mental Hospital where he died in 1935. Molly slept rough for many years and was often seen walking along the Carrigrohane Straight Road and sleeping what is now the Muskerry Golf Club. In 1945 she entered St. Finbarr’s Hopsital where she stayed until she died on 29th October 1969 aged 95 years. She was buried with her family at Matehy Cemetery. 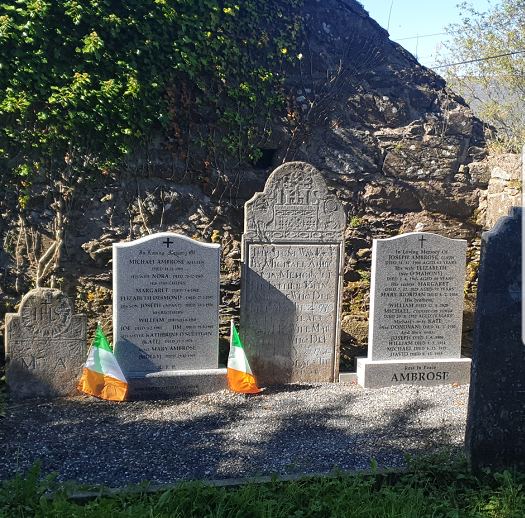 Joseph, my great-great-grandfather, was the farmer in Gurth, born 1842. He married very late in life on June 11th 1891 to Elizabeth (Lizzie) O’Mahony, daughter of Elizabeth (nee Twomey) and William O’Mahony, of Fergus, Coachford in the Roman Catholic Church of Aglish. His best man was his nephew Joseph Ambrose of Tower, her bridesmaid was her first cousin Hannah McSwiney of Rathpeacon house (sister of Fr. Matthew McSwiney, Diocese of Cork & Ross). Joseph and Lizzie had five children; Michael, Katherine, William, James and Joe. An article in the Irish Examiner from 1895, describes how when Joseph admitted a Timothy Riordan, of Loughane, into his house on December 30th, he was assaulted. “Riordan, who had drink taken on the night, was sentenced to jail for one month.” Joseph died on the last day in 1904 from pneumonia leaving Lizzie with a young family and a farm. Lizzie wore mainly black after her husband’s death however she was noted to be a cheerful and happy person. Lizzie died on April 2nd 1943 in her 85th year, the same day as her granddaughter Margaret.

Michael (son of Joseph), born April 14th 1892. His godparents were his uncle Michael Ambrose of Tower and his aunt Ellen O’Keeffe of Bridgestown (grandmother of the late Edmond O’Keeffe). Michael married Nora Kelleher, youngest daughter Margaret (nee Twomey) and Daniel Kelleher, of Knocknagoun Rylane, in St. Peter’s and Paul’s Church on September 29th 1931. Despite being in Cork City, St. Peter’s and Paul’s was a popular choice due to the accessibility of both families to the wedding. The bestman was his brother William Ambrose, the bridesmaid, her first cousin Eileen Crowley. Michael was a member of the 6th Battalion, 1st Cork Brigade, Old I.R.A. When his mother (see image 3) bought the Killeen farm from the ‘Tower Ambroses’, she gave it to Michael, and this is where we currently reside. Michael and Nora had four children; Lill, Margaret, Joseph and Kathleen. Elizabeth married Con Desmond of Berrings. Margaret died in 1943 due to complications from spina bifidia, Joseph died shortly after birth, and Kathleen (my grandmother) married Maurice Cogan.

Katherine (Kate), born January 15th 1894 and baptised on January 18th. Her godparents were her uncle Willie O’Mahony of Fergus, and her paternal aunt Mary Riordan. She married Patrick O’Sullivan, of Courtbrack, Blarney in 1933. They had no children. Their land occupied the space where the current Courtbrack Hall exists. Kate donated the piece of land for the construction of the Hall and the community erected a plaque in her memory. Patrick died in 1949 and is buried in Donoughmore, while Kate died on Patrick’s Day 1978 and is buried in Matehy.

William, born February 24th 1896. He was a talented farmer and dog trainer. He farmed in the homestead in Gurth. He spent 3 months in Cork Prison and 1 month in Bere Island in 1920 along with his younger brother Jim for not reporting planned IRA activity which was to take place near the boundary of their land. They were reported by an O’Grady man and the arresting officer as Officer Beausang. He trained dogs such as Rovers Daughter, Shournagh Vale and the prize-winning, the docker (see image 6). William married Peggy Cronin, of Coolmona, Donoughmore, in 1950 and they had one son Joseph, who still lives on the Gurth farm with his wife Kate. William died on June 13th 1960 and was lowered into the grave in Matehy after a military funeral.

James (Jim) was born June 15th 1898. Imprisoned with William in 1920, he also farmed with him while residing with him and his elderly mother in the 1930’s and 40s. When William marred, Jim moved to Courtbrack to his widowed sister Kate, and later with his niece Kit, my grandmother. He never married. He outlived all his siblings and also was the only one to travel by airplane, to his younger brother Joe in America.  He died on September 28th 1980 and is buried in Matehy.

Joe (Joseph Ignatius), born July 18th 1902, was the youngest of the family, often referred to as “little Joe”. Joe went into the Christian Brothers and was known as Brother Paul. He subsequently left the Brothers and emigrated to America in 1928. He met a Tipperary woman, Mary Lee, and they married in 1938. His bestman was his uncle Patrick (Paddy) Ambrose, who lived there too. They lived in Connecticut . Joe and Mary has five children – Elizabeth, Joseph, Geraldine, Mary and William. He died on January 2nd 1980. 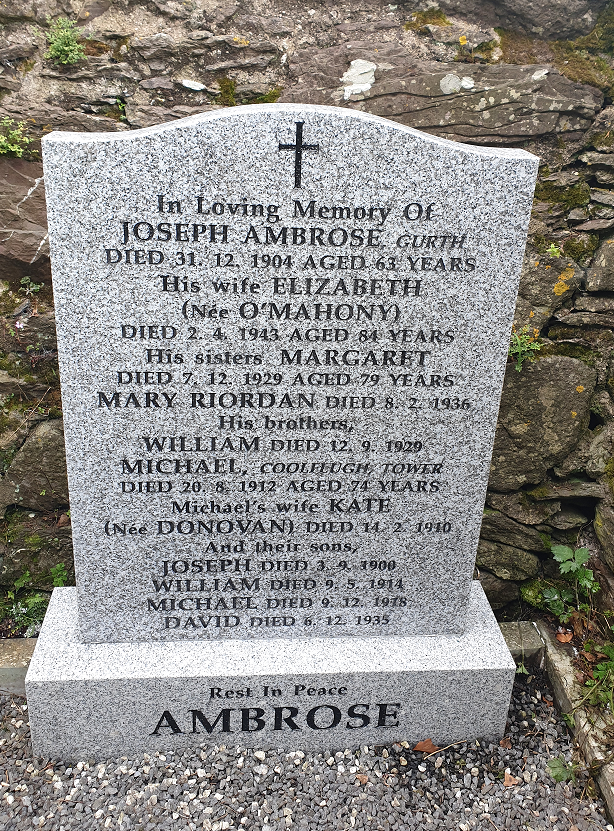 Not quite the standard of hotel that you associate with people from Tower village ...

Lilian Bland, anything but………..