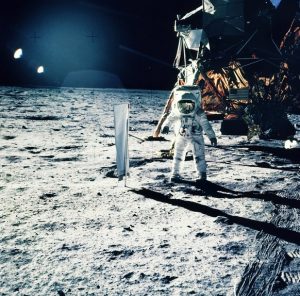 This day fifty years ago, 20th July 1969, was the first day that a man stood on the moon. There are numerous newspaper articles and podcasts, documentaries, and my personal favorite a Twitter thread on how the astronauts went to the toilet, and stories about the women who ensured that man was able to walk on the moon, reliving the momentous events of that day.

There is even, in Cork city this weekend, a Moon Walk organised by Blackrock Castle Observatory. Just reading the description of the walk is informative and interesting, its such a pity the weather is so horrible this weekend.

While we look back from our technological advanced state today it must be even more incredible for our ancestors from 1901 and 1911 to comprehend sending human life to the moon. And then coming back again.

What would our ancestors, from the dusty forms of the 1901 and 1911 census, thought of someone going to the moon? Would they have been incredulous and laughed at us or would they have accepted it? How many of those people who were recorded in these census returns were alive for the worldwide famous event in 1969?

It is incredible to think of someone, who grew up in a time of no electricity, no internet, no piped water, no flush-able toilets let alone a sewage system, no airplanes, no cars even though they were starting to appear on city roads (first petrol car seen in Ireland was owned by a Dubliner, Dr. John Colohan, who imported a Benz Velo in 1896); someone who grew up in this environment would have glued to the front of a black and white television, to watch as Neil Armstrong took his famous leap of faith.

And for us today, children of the meteoric advance in technology it is incredible to think of how these astronauts brought a spaceship to the Moon using a computer with less power than a present-day smartphone that we use to browse RTE and play Candy Crush!

Even more incredible is that the third astronaut in that famous mission, Michael Collins, who not only shares his name with Ireland’s greatest freedom fighter, also shares his West Cork roots. Jeremiah Bernard Collins, his grandfather, had left Dunmanway, County Cork in the early 1860s as a young boy to join the rest of the family in Cincinnati, Ohio where Jeremiah’s grandson Michael would eventually make his way to NASA and then the moon. Technically, Michael Collins did not actually step on the moon, he stayed in Apollo while the other two astronauts walked on the moon.

So we can say that there was a little rub of the green that helped make the mission a success!

Not quite the standard of hotel that you associate with people from Tower village ...
My grandmother Kit Cogan was born Kathleen Ambrose on 30th May 1936 in Killeen, Vicarstown, the ...