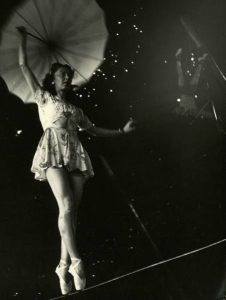 If you ask someone what type of job did their granny do the majority of people would not reply “tight-rope walker”! But Maryanne Hudson, with the rather fabulous stage name “The Twinkling Lady on the Twinkling Wire” was born into a travelling circus family sometime in 1893 in Waterford and was accomplished at the art of funambulism, another word to describe the art of tight-rope walking.

(For the purposes of this story I will use the name Marianne, in various records it has been recorded as Mariane, Mary-Anne, Mayann and Marion so for the sake of simplicity I will use Marianne here.)

The Hudson Turner travelling circus was founded and run by brothers William and Samuel Hudson who were originally from Manchester. William married Catherine (Kate) Tolton in Ballina Co Mayo in 1884 and the family toured for the rest of their lives.

Kate’s family would also appear to have been in the circus as her brother Francis Tolton is recorded as being a travelling musician. So the performing gene ran through both sides of the family.

The Hudson family circus mainly toured the south-west of Ireland, so much so that all the children were born in different counties.

From the 1901 and 1911 census we can see that all the family who were old enough were involved in performing in the circus, while the job titles recorded in the census is simply recorded as “circus performer” we know that Marianne was an accomplished tight-rope walker.

The official definition of a tight-rope walker is “ is the art of walking along a tensioned wire between two points, and can be done using only one’s body to maintain balance or by balancing with a prop like a pole or umbrella.” Add to this the fact that the wire is usually at least 20ft above ground with no netting to catch the walker if they fell. And also, to make it more extreme the tight-rope walker usually balanced a prop such as an umbrella or rings or juggled clubs. Some of the more extreme performers have been known to push a wheelbarrow on a tight-rope! 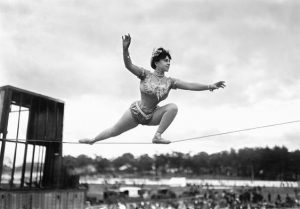 Marianne married a fellow circus performer in Killarney in 1915, Joseph Reid was from Scotland and was a wall of death driver. They eventually moved to Scotland where they toured with Pinder’s circus, mostly around Glasgow and the surrounding areas. Joseph’s stage name was Hercule the Herculean Hero alongside his lovely wife Marianne, The Twinkling Lady on the Twinkling Wire. How glamorous it all sounds! 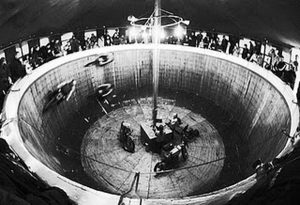 Joseph worked at a shoe-making shop with his brother in between performances in a shop on the outskirts of Glasgow, making shoes is a lot safer than riding a motorcycle around a wall of death!

Unfortunately real life was not as glamorous as the stage names imply. According to one of Marianne and Joseph’s grand-daughters Marianne died at a tragically young age in an accident while attempting to tighten a pulley rope on the high wire. To add to the tragedy she was pregnant at the time but did not know.

Joseph continued to bring up his young family, work in his shoe making shop and also continued to tour as a wall of death rider. Tragedy struck once more and Joseph died following a motorbike accident; Marianne and Joseph’s eldest son Joe was nearly old enough to have his first performance in the circus but after his father’s death this never happened.

There are possibly people today reading this story about the Hudson Turner circus whose ancestors would have seen a performance from the family in a small village in county Clare or Waterford or Tipperary. People who subsequently emigrated to England or Scotland or even further afield to America, who would have talked about the amazing and fantastic shows they had seen, so glamorous and glittering and worlds apart from their everyday lives.

When the family performed in Tower in 1911 their audience would have included locals, farmers, mill workers, nurses, factory hands, maids and chefs from the Hydro. But also in attendance would have been the hotel guests, such as Ethel Susan Lucena who was innocent of the trials and tribulations ahead of her in years to come when she was defrauded by a conman preying on her romantically. Shenstone Bishop, who had the dubious honour of being one-half of the first couple to apply for divorce in Ireland.  Maybe even the Dr Richard Barter himself, founder of the Hydro and vocal advocate for water therapy may have attended.

People who emigrated to America may have even seen a performance of the great Barnham Circus, immortalised this year by Hugh Jackman in “The Greatest Showman”. But I bet that they would have said that their first visit to the circus was the one that always stayed with them. Marianne Hudson and her family will have lived on in people’s memories for a very long time.