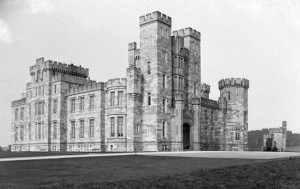 There wasn’t too many children staying in St Anns’ Hydro hotel on the night of the census in 1901; in fact there was just four under the age of 17 on that night. Geoffrey W. Calverley was the youngest in the hotel that night; he came from two very well connected families. His mother, Edythe A. Calverley, was born into a family which owned Clontarf Castle. And his father, Walter Calverly Blayds Calverly, appears to have lived in Mitchelstown Castle.

According to the 1901 census there was 195 rooms and 44 windows to the front of Mitchelstown Castle; imagine the cleaning involved in that. Mitchelstown castle no longer exists; it was burnt to the ground by the IRA in 1922. Back on the night of the 1901 census Geoffrey’s father was living in Mitchelstown Castle where he is recorded as being the “Head of the family”; meanwhile the rest of the family, Geoffrey aged 5, his sister Sybil aged 12 and their mother Edythe were recorded as being boarders in the Hydro. It is unclear if a “boarder” implied that the person was staying there long term or was simply a guest staying a few days, enjoying some of the treatments available at the Turkish Baths in the Hotel.

Mitchelstown castle and lands were owned by the Countess of Kingston and I am unable to find any information that would shed light on whether Walter Calverley lived in the castle full time or elsewhere or if this was the Calverley family home.

So it is safe to say that Geoffrey was not a stranger to large, opulent houses when he stayed in the Hydro Hotel on the night of the 1901 census. He was born on 22 February 1896, the second child and only son of Walter Calverley Blayds Calverley, Gentleman, of Michelstown Castle, Co Cork and Edythe Agnes, daughter of Colonel Edward Vernon of Ardtully House, Co Kerry.

Today, if a family are going to stay in a hotel for a few nights having a pool and a kids club and a playground are must-haves. So I am not sure what a five year old boy would have had to entertain himself with when staying at the Hydro back in 1901! There doesn’t seem to have been a Governess or Nanny employed in the Hydro the night of April 1901 but that is not to say that she lived elsewhere though. But I do wonder who looked after Geoffrey and his sister because if there is one thing that endlessly watching “Downton Abbey” has taught me, it is that the mothers of wealthy families generally did not look after the day-to-day care of their children, neither did they involve themselves in any sort of play or games!

The grounds of the Hydro were magnificent so Geoffrey and his sister no doubt played on and rolled down the lawns that were laid out in a terrace to the front of the hotel. They possibly walked along the Shournagh river back towards Courtbrack, maybe they played hide-and-seek in the woods that would have been blanketed with glorious bluebells in April. Maybe they went horse-riding and visited Blarney castle. At five Geoffrey was probably too young to play golf at the newly established Muskerry golf club but he might have bicycled along the roads and travelled on the Muskerry tram.

Geoffrey’s father Walter Calverley died in 1906 in Margate in Kent when he was 56 years old. Interestingly the house in which he lived and died in in Margate was called “Clontarf” after the castle that his wife’s family owned.

Geoffrey attended a prestigious boarding school in England, Charterhouse in Surrey, which is one of the original seven public schools as defined by the Public Schools Act in 1867, where he is honoured as being one of the 647 former members of the school who died in or resultant of the Great War. After Charterhouse he passed into the Royal Military College, Sandhurst in 1913 and was commissioned into the Royal Irish Rifles in October 1914.  Geoffrey’s mother Edythe had died the previous month, September 1914.

According to letters in March 1915 from Hugh S. Calverley  , a relative of the family who was training at the Chelsea School of Instruction learning the arts of signalling, Sybil, referred to here as Mona, was visiting with family in London and waiting for word from her brother Geoffrey, like every typical young man who is out enjoying life he was a tad lax with keeping in touch with his big sister as Hugh says he has only written twice in a three month period!

Following promotion to the rank of temporary Captain in March 1915, Geoffrey was wounded and received the Distinguished Service Order medal ; this was for his heroism at La Boisselle at the Somme in France, between 7 and 16 July 1916.  He then transferred to the Royal Flying Corps and was awarded his “wings” in June 1917, but tragically died in a flying accident at the Royal Flying School, Upavon, Wiltshire on 7 January 1918.  He is buried at Upavon Cemetery. 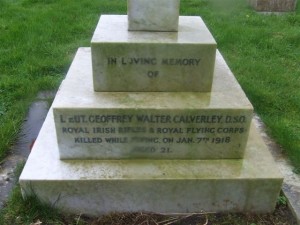 The Central Flying School, or CFS, was formed in May 1912 at Upavon and is the oldest flying training school in the World. The initial primary aim of the Central Flying School was to turn out professional war pilots and this was to be achieved by only accepting for advanced training men who already were in possession of a Royal Aero Club Certificate. So it is safe to assume that prior to his transfer Geoffrey already had flying experience.

The Will/National Probate Calendar from the UK simply stated that he left his money to his sister Sybil.

Using the Bank of England’s inflation calculator that figure of £14,708 is roughly worth about £1,426,676 today, not an insignificant sum.

Geoffrey’s short life and untimely death is like a story lifted from a romantic novel. I imagine someone like Jonathan Rhys-Meyers starring in his tragic life story as the dashing, handsome young  man who was born into wealth and privilege in Ireland, educated in England at prestigious boarding and military schools, orphaned as a young teen and joining up at the age of 18. He was wounded but survived one of the worst battlegrounds of WW1 where thousands were killed. And went on to fly aeroplanes in an industry that was in it’s infancy, only to die in a training exercise before he turned 22.

I wonder what made Geoffrey want to fly aeroplanes, what made him join the RFS? Was he fascinated by planes and longed to fly them? Or was he tired of fighting on his feet or maybe he was no longer able to physically carry on as a foot soldier? Maybe he was following a friend when he transferred from the Royal Irish Rifles? Speculation is unfortunately of no value, as there is no record to state categorically why he made the decision he did.

I would like to imagine an little five years old boy with a mop of unruly hair, dressed in a tweed short trousers suit, complete with a bow tie, sitting on the gate at the Hydro lodge, munching on freshly baked bread from the kitchens in the hotel, swinging his legs, waiting for the unmistakable sound of the Muskerry tram as it huffed and puffed along the tracks. It is rather sad to think of that little boy, innocently waiting for the tram and who would die, only 17 years later, in a flying accident.