Denis McCarthy Mahony, 46,  and his wife Mary, 43, stayed in one of the grand rooms in the main part of the Hydro hotel the night of March 31st 1901. They are recorded as being “Boarders” of the Hydro so more than likely were on a pro-longed visit, usually up to six weeks in order to get the most of the services that the hotel had to offer.

Denis married Mary Ronan on the 28th of December1891 in South Dublin, Mary was living in a house on Fitzwilliam Square and her father was Walter Ronan, a solicitor working for Minerva life assurance company which was based on the South Mall in Cork.

Ten years later, Denis and his wife Mary are relaxing in their own house, 2 Howard Place, Kingston Co Dublin. Their own house had fourteen rooms and sixteen windows in the front, and there was only Denis and Mary living in the house with just a temporary servant, Bridget Talbot.

The houses on Howard Place, which was a continuation of Gresham Place, are now the car-park of the Royal Marine Hotel. That is some change for a ten-year challenge! Which more than likely took a lot longer than just ten years. 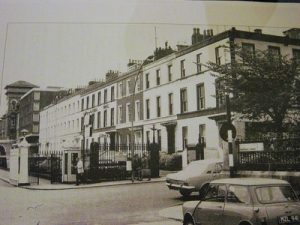 Denis was a barrister who worked for the Irish Land Commission and later went on to acquire the grand tile of “Examiner of Titles”.

The Irish Land Commission (or simply Land Commission) was created in 1881 as a rent fixing commission by the Land Law (Ireland) Act 1881, also known as the second Irish Land Act. For a century it was the body responsible for re-distributing farmland in most of Ireland. Put simply, it was revolutionary in Ireland as it facilitated the breakup of large estates and allowed tenants to buy land from the landlord. Between c. 1885 and 1920 the commission oversaw the transfer of 13,500,000 acres of land on the island of Ireland.

Its work obliged it to establish who had legal title to the properties, a hugely complex task. So the Land Commission began to collect wills, correspondence, estate records, family trees, lease-books, tenants’ lists, maps, deeds, correspondence and much more.

All of this was done by hand, pen and paper. No Excel spreadsheets, no scanning documents, no Cloud storage of lists of documents and reference points, no AI robotics to automate the mundane tasks; everything done by hand, indexed and stored in files and folders. It is pretty hard to envisage how much work that actually entailed.

According to Terence Dooly’s excellent history of the post-1922 Commission, The Land for the People: The Land Question in Independent Ireland (UCD Press, 2004), it holds approximately 11 million separate items. So for people who have an interest in family history it is an untouched gold mine; because to get access to any of the records, which are rather incongruously stored in a warehouse in Portlaoise,  you have to supply individual written permission from descendants of all those involved in the original transaction. Not an easy task.

There is one further interesting incident in Denis’s life story; during the Rising in 1916 Denis was a Cadet-Sergeant who helped an injured soldier from the 4th (Queen’s Own) Hussars who had received injuries during the fighting on College Green. Denis was a member of the Officer’s Training Corps (OTC) in Trinity College.

When fighting broke out on Monday April 24th 1916, there was only a few Trinity employees and a handful of students who were on: the gates were locked and secured by the porters; OTC members were armed with service rifles from the stores in the OTC headquarters and put on guard duty; and provisions were requisitioned from the College Co-op. Early on the morning of Tuesday 25 April the OTC headquarters was transferred from near the Lincoln Place gate to the front of College.

From there snipers had a view of Dame Street, College Green and environs, and rebels passing in either direction were easy targets. During these first few days of fighting the military presence in College was augmented by soldiers of various regiments on leave in the city at the time, as well as some ‘Colonial’ soldiers (from South Africa, Canada, Australia and New Zealand). 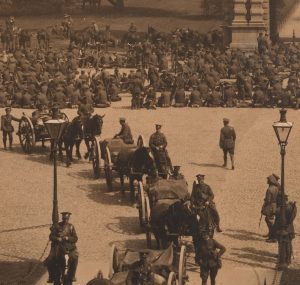 Denis, who was 61 at this stage, and three others helped the injured soldier, Private Arthur Smith, to Trinity College. Private Smith subsequently died on the cricket field in Trinity and is buried there. Denis and the other three soldiers received a medal for their defence of Trinity college during the fighting; there was a special mention that “The four OTC soldiers carried the injured solider while being shot and under circumstances of special difficulty”.

At the time Denis was practicing on St Stephen’s Green so it is possible that he moved on foot from his offices on the Green to Trinity where he helped to defend the college when fighting first broke out on the 24th. However, it was Easter Monday so he more than likely was home in Kingston (Dún Laoighaire) and made his way into the city centre.

Denis died in 1945 and left all his money to his wife’s nephew John Ronan; Denis and Mary had no children. Mary had re-deceased him by a number of years and he was living in The Standard Hotel on Harcourt Street when he died.