St Ann’s Hill Hydro is, unfortunately, long gone now. However it remains a source of fascination for me, and plenty of others too, and while doing research online last year  I came across some information that took me by surprise, mainly because I never thought of the Easter Rising 1916 and the Hydro having much in common!

But on the National Archives website I came across three applications for compensation as a result of the destruction caused by the Rising, for three people who listed St Ann’s Hill Hydro as their address at the time of their application.

The Property Losses (Ireland) Committee, 1916 (PLIC) was established in June 1916 to assess claims for damages to buildings and property as a result of the destruction caused by the 1916 Rising. The Committee put pressure on the Irish Parliamentary Party and the British government to provide compensation to those who had lost their business or property and to provide for the associated costs of rebuilding in the wake of the Rising.

The collection provides a valuable insight into the level of destruction sustained in the wake of the Rising to the area around Sackville Street [O’Connell Street] and Henry Street. The website has proved to be a virtual rabit hole for me, I have spent hours on it recently!

There were three ladies whose application for compensation caught my eye due to their Hydro address.

Charlotte Catherine Kelly was a boarder in St Ann’s Hill Hydro hotel at the time of the 1911 census. I have been unable to confirm, with any degree of certainty, where she was born or who her family was. However there are some clues from her original compensation application file that can be accessed on the website of the National Archives 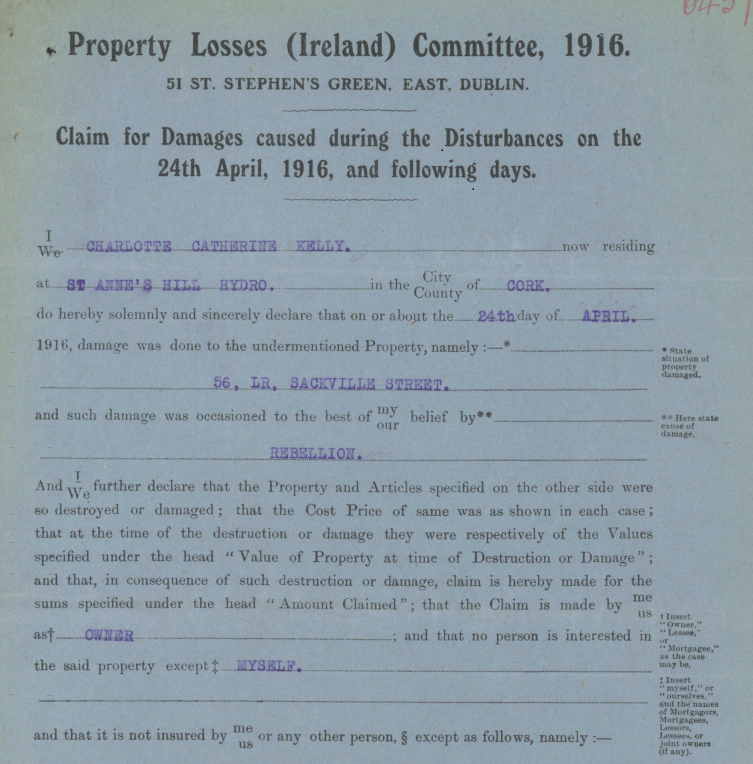 Charlotte had originally submitted an application as part of a much larger application for D.A. (Daniel Alexander) Kelly trading as M. Kelly & Sons Fishing Tackle shop at the corner of 56 Lower Sackville Street in September 1916. The original claim by Daniel was changed so that the items which were being held in a room at the top of these premises for Charlotte were removed and submitted in a separate claim a few weeks later in October 1916.

I am unable to confirm if Charlotte and Daniel were siblings but it is fair to say that both came from moneyed families; Daniel was owner of at least one premises in Dublin city centre with his own address being the leafy environs of Wellington Road. Charlotte appeared to have stayed for long periods in the Hydro, which was not cheap.

The items that Charlotte claimed for included a “Mahogany Prie Dieu Chair with Tapestry“, “one hundred bound volumes, books of general literature”, “a fold draft screen with tapestry panel”, “a maderia wicker work table” and “two basket trunks  with ladies dressed and wearing apparel”. And in the words of the assessor, “these items were very badly damaged by rifle and gun fire”.

The reason for the cause of damage in the application is “Rebellion”, not something that an insurance assessor would see every day!

If you wish to learn more about the detailed chronology of the fighting on Sackville Street then this article has a detailed exploration of the fighting at this shop, known as “Kelly’s Fort”, and some extremely interesting details of 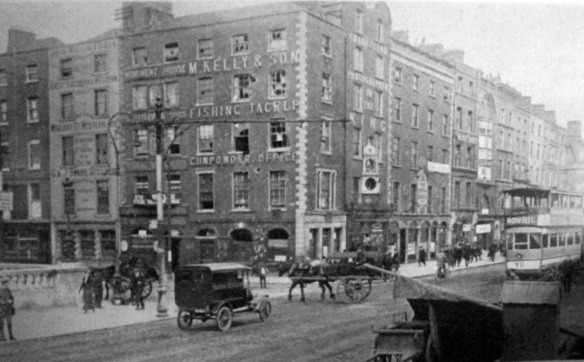 Kelly’s Fort after the Rising showing the extensive damage done to the building (Image: Dublin after the Six Days’ Insurrection, 1916

the conflict. Also, the original application by D.A. Kelly has quite a lot of detail of the damage the building on Sackville Street sustained as a result of gunfire, it is fascinating.

It is quite possible that D.A Kelly also stayed in the Hydro as this application is also signed while staying in the Hydro and was signed by Ernest Mahony, Justice of the Peace and director of Blarney Woolen Mills, who also lived in one of the houses in the grounds of the Hydro.

It is a bit of an eye-opener to see that Charlotte’s claim for £25 was paid out while Lizzie Walsh, a maid at the Metropole Hotel on Sackville Street, was denied £16 in order for her to replace her wardrobe of clothes which was destroyed by the fire which eventually engulfed the hotel, even though she had pleaded that in order for her to find another job she needed to buy a new uniform. It is upsetting to read her pleading note that she be granted more than the awarded £7 in order to clothe herself.

And in a way, it has chilling parallels with the fire which engulfed Douglas Shopping Centre last Saturday 31st August 2019 with many staff of the centre out of a job and unsure of what to do next but hopefully they will not find it as difficult as poor Lizzie to get financial support in order to live their daily lives.